BAIT is one of our best retail partners .  After developing the Transformers Universe we were talking with BAIT owner Eric Chang about doing something special, original which would blow people's socks off.  I think we nailed it.  BAIT supported the project and now it's their Exclusive.  The Silver Bullet OPTIMUS PRIME is releasing at BAIT's booth Saturday July 20th at SDCC>  Go pick one up.  Retailing somewhere bewteen $110.00-$115.00USD.  An Edition of 200.  This thing is H U G E !  Literally, 8" tall, wide, articulated with a huge Ion Blaster.   It should be $200.00 but it's not.  It's half that price.  How many 200 Edition size runs on OPTIMUS PRIME has there been?  Probably not many.  So here you go.  Boom!  Better info below.

OPTIMUS PRIME is the fearless and benevolent leader of the AUTOBOTS.  A magnanimous General aimed to protect the Universe against the tyrannous threats and attacks from the destruction hungry DECEPTICONS and their leader, MEGATRON.  OPTIMUS PRIME is armed with size, courage, intellect, and his Ion Blaster and Energon-Axe.

The Loyal Subjects is proud to introduce the 8" Vinyl Transformer Collectible Series featuring OPTIMUS PRIME.   This HUGE collectible features several points of articulation and PRIME's trusty ION blaster.  Several color ways outfit the Series ushering the collector through different eras in OPTIMUS PRIME'S journey - The Original OPTIMUS PRIME featuring OP's bright Red and Blue colors.  DEAD PRIME - an hommage to the great AUTOBOT General.  NEMESIS PRIME, a BLANK DIY PRIME, and the Bullet Series OPTIMUS PRIME - all of the Bullet Series are exclusive to Los Angeles retailer BAIT.  The first of BAIT's Bullet series releases will be an SDCC Exclusive featuring ornate deco and Silver Bullet marks, an Edition of 200.  The Bullet series is a testament and illustration to the battle hardened, tested, sturdy and victorious OPTIMUS PRIME.  The 8" OPTIMUS PRIME series will sell in a range - $100.00-$115.00/item.  Each color way is in significantly low edition runs.  Check back withwww.theloyalsubjects.com and http://www.baitme.com for additional details.

Optimus Prime and the Transformers name, marks, logos and likeness are Copyright and Trademarks of Hasbro, Inc 2013.  Under License from Hasbro, Inc.

Manufactured and Distributed by The Loyal Subjects, LLC 2013. 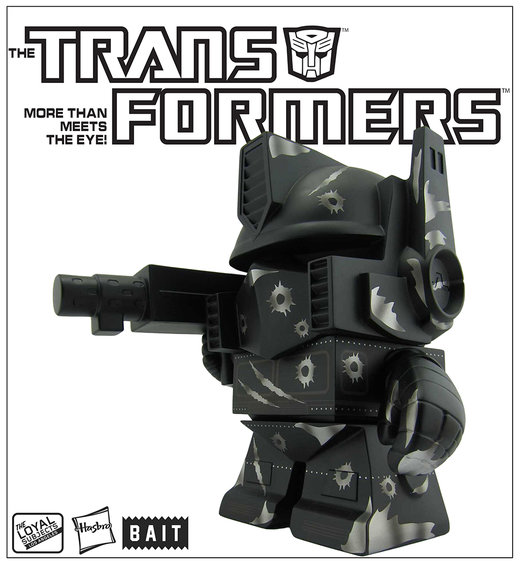