I have an older sister.  Being the kid brother I was put through the sibling gauntlet of experimentation.   Occasionally I would get a hug and compliment but mostly terror.  A hose turned on while dressed for church, a practical joke extending to my sister and her gaggle of gossiping goons (aka mallrats), the “I’m going to lick your cupcake so you won’t eat it” technique, maybe a little extra backwash in your Capri Sun…you know, the usual Suburban edition of Guantanamo Bay.  One particular evening, my mother was out, my sister (and her friend) were tasked to watch the kid brother – real simple instructions – “keep your brother alive and make sure he has something to eat.”  Me, being fairly independent, even at a young age; just needed a baseball, a glove, a skateboard, a surfboard, my Vans, some coloring pencils, some drawing paper and I was “a-ok”.   I shrugged off the usual Hermit Kingdom style psychological torture tactics.  Perhaps it was my access to my mother’s stereo system – Steve Miller, Sgt. Peppers, Songs in the Key of Life – all on 8 Track!  That’s where the world disappeared for me.  Not this night.  Besides the high tech and highly coveted 8-Track in stereo setup, my mother had a VHS Tape machine.  The top of the door rose as if blending realities with the Delorean from “Back to the Future”.  Equally as clunky, flat metallic silver steel, motorized and whizzing gear mechanisms.  A lot of action just to drop a tape in and let the spindles spin.  Apparently my sister had a tape to play me.  Knowing I wasn’t much nor had the stomach for slaughter, blood and guts – as a kid the Kiss record freaked me out - *just an aside, partly due to “Phantom of the Park” where the evil Gene Simmons breathed fire, and the only sound that came out of his mouth was a raging, belching dragon…and he killed some guy by busting through a wall.*   This tape had the name “Nightmare on Elm Street” scrolled over the top.  Oh shit.  I get the picture.  Cut to my sister dropping the tape in, turning out all the lights then locking herself with her friend in her room, cackling laughing pouring from the thin stripped light splitting cracks of the door jam.  It was one hell of a ride.  Hell, not using euphemistically or with any hints of irony.

Cut to the Exorcist, Friday the 13th and It.  All with similar, and visceral memories.  “It” was a bit bizarre.  I watched that with my mother.  I think it was an ABC movie of the week.  A big “to-do”.  A TV Movie from Stephen King’s pages.  Stephen King was, well, King of the frightening and odorly, deadly supernatural (on the silverscreen).   Having the luxury to watch a Stephen King movie, for free, in your pajamas, at home – who could pass?  My feelings – I liked “It”.  I thought it was funny.  The creep hadn’t crept and spooked me out.  If I was Siskel and Ebert, two thumbs up!  The Exorcist – hmm…the Omen freaked me out more.  I loved the barf scene, the little one-liners…all good fun.  Make sure to check the bottom of each bed from Reagan’s Build-A-Bed – we’ve planted a unique quote from the movie on each retailer exclusive.  Friday the 13th – yes, freaky.  Yes, scary.  A retaliatory and vengeful zombie swoll (assuming) from a fare share of protein shakes and cross fit training mindlessly lops kids heads off with garden tools – yes, very freaky.

In the end, these memories are priceless.  Even my lovely sister’s gambit of torturous pitfalls and landminds.  We’re all grown, she is a VP of a movie studio, I own a toy company.  She makes the features, I make collectibles.  Apples that fell close to each other from the tree.  Alas, we are siblings.  Want to know which makes the Horror Pack Collectibles more fitting?  I’ve lived on “Elm Street” for 24 years.  I pass Freddy Kreuger’s house every day, as long as I’m home and not in China, of course.  Everytime, I still point it out – “Look, that’s where Johnny Depp was grinded up in a bed blender and shout out like Old Faithful onto the bedroom ceiling of that house!  Isn’t that great!”

Life is funny; the universe has a wonderful way of tying everything together, neatly. 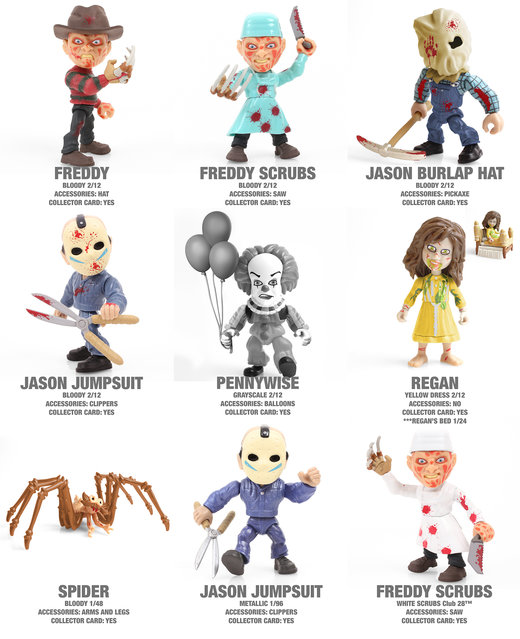