I was in 8th Grade in 1987.  Reagan was eating Jelly Beans and forgetting his words, Ollie North was up on Capitol Hill testifying/lying in front of Congress on all the backend arms deals and subsequent insurgence funding for coups d’états in Central America, “Welcome to the Jungle” was blasting out of everyone’s Walkmans, Tony Hawk took asymmetrical skater hair to zeitgeist levels, John Hughes couldn’t make a movie that sucked, T&C Surf Design dominated the backs of every teen and preteen rocking dayglo Zinka and a sweet pair of Oakley Blades, Magic Johnson won his 2nd NBA Championship and was about to go Back 2 Back the following year, and Mega Man made his first Nintendo Debut!  1987 was the business!  Here we (some of us) 30 years older but none the wiser; still geeked out over Nintendo, (some of us) still geeked out over the Lakers, most of us traded our Tony Hawk skater hair in for beards and grays, and many of us freaked out on the Mega Man 11 trailer and subsequent announcement for our beloved ‘Bustering’ friend with a pension to blast opponents powers right out of their skins!  Let’s be honest – Is there a better character design than this rounded domed futuristic bustering bandit?!  C L A S S I C ! ! !  Absolutely perfect character design.  He’s cute, he’s symmetrical, he’s feng shui and he’s dangerous!  The kid carries a cannon on his arm – that’s got to be dangerous!

The Loyal Subjects is bringing Buster Fire to the shelves of Hot Topic this Weekend and Next Week!  TLS x Mega Man x Action Vinyls gets its wings; a bunch of shiny, slick metallic bustering mayhem filled with heroes, villains, rivals, and the Hot Topic ONLY Exclusive Character, SKULL MAN!  The Skull Man design is hot!  No pun intended.  If you find yourself diddling away over re-runs of the Twilight Zone, doubled over in stomach pains because of Grandma’s Green Jello desert with floating bits of cottage cheese, or you’ve had enough of Bing Crosby and David Bowie launching into pitchy Christmas serenades, then Sneak Out of the House!  Go check out Hot Topic and be the first on the block to take this Epic Series home!  Take your sanity back!

These guys have removable Busters, additional articulation at the elbow, insane sculpt details, insane deco details and Club 28!  The Club 28 items are the ONLY items that come with Mega Man’s usurpation of opposing nay-do-weller’s powers plus three interchangeable expressions!  How radical is that?!  Tony Hawk skater hair rad?  You Betcha!  Grab these Metallic Misfits while you have the chance!  Pose these suckers well my jedi brethren and sister’en.  And “Have yourself a Merry Little Christmas…” 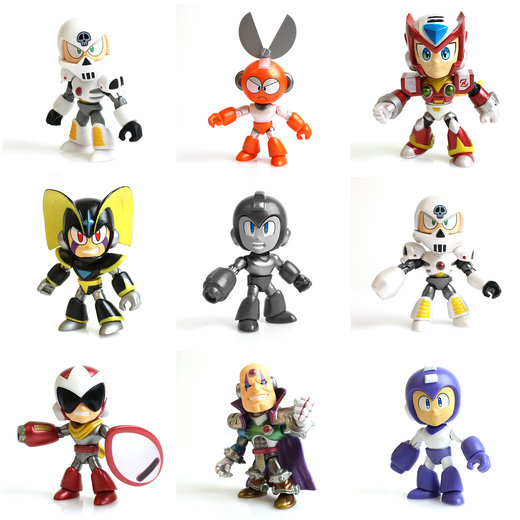